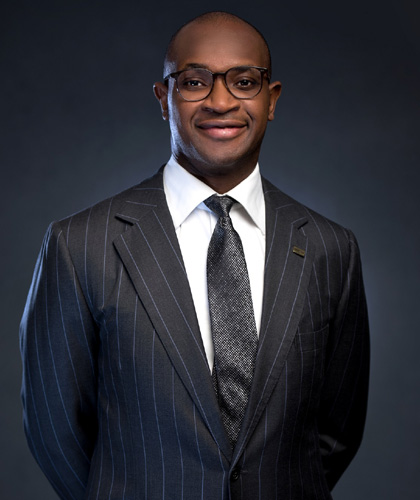 Ladi Balogun joined the FCMB group in 1996 as an Executive Assistant to the Chairman and Chief Executive. He has worked in various areas of the bank, including Treasury, Corporate Banking and Investment Banking. He was appointed an Executive Director in charge of the Institutional Banking Group (IBG) in 1997.

Ladi has extensive experience in Commercial and Investment Banking in Europe, the United States of America and Africa. He began his banking career in 1993 at Morgan Grenfell and Co Limited, where he worked in the areas of Risk Management and Corporate Finance (debt origination). He was responsible for managing the bank's trading and investment positions in Debt Instruments in Latin America and Eastern Europe. He was also part of a team that structured numerous complex debt deals in Latin America, Eastern Europe and the Asian sub-continent.

Subsequently, he worked at Citibank in New York before returning to Nigeria in 1996. Ladi holds a Bachelor's degree in Economics from the University of East Anglia, United Kingdom and an MBA from Harvard Business School, United States of America. In 2017, Ladi became the Group Chief Executive of FCMB Group Plc.